New research shows that the COVID-19 pandemic has led to an increase in the number of Canadians who participate in short-term contracts or freelance work, such as rideshare drivers, freelance writers and graphic designers, or contractors. These gig workers now represent more than one in 10 Canadian adults (13 per cent), and more than one in three Canadian businesses (37 per cent) employ gig workers.

Key contributing factors fuelling this increased footprint include the prevailing economic impact of the pandemic, with a general decline in real output across Canadian businesses in 2020. This includes four per cent that shut down temporarily in 2020 and remain shut, and a further 37 per cent that remain only partially operational.

Gig workers and the businesses that employ them want the same thing from a payments solution standpoint: fast, convenient, secure, and traceable payments methods. However, the research indicates there is a mismatch between how workers are getting paid and how they prefer to get paid among a large portion of gig workers in Canada.

Of those that participate in the gig economy, almost 40 per cent want to see improvements to how they are paid. Two key areas that gig workers identified for improvement are to be paid faster and be able to trace these payments more efficiently. While payments options do exist (such as direct deposit, which is fast, secure and convenient), cheques and Interac e-transfer continue to be preferred by small-to-medium businesses (98 per cent of Canadian businesses), leaving gig workers’ preferences unaddressed. Modernization of Canada’s payments systems, including the introduction of real-time payments, will help support solutions for the gig economy.

Shifts in the demographics of gig workers

The pandemic has not only fueled the gig economy footprint, it also led to a change in its demographic make-up. This includes the entrance of more workers between 35-54 years old (11 per cent), females (10 per cent), and those living in suburban areas (11 per cent).

While the gig economy has become more mainstream as a result of the pandemic, it is still largely comprised of workers who fit a discernible profile, being predominantly male, younger (18-34 yrs.), living in urban areas, well educated with lower incomes, usually self-employed / run their own business, and frequently send money internationally.

Overall, gig workers are highly engaged when it comes to digital payments adoption. They are also more likely to frequently use electronic payment methods than non-gig workers such as EFT (electronic funds transfer), Interac e-Transfer, and PayPal.

Around half of gig workers (49 per cent) used mobile payments (such as Apple Pay, Google Pay, etc.,) in the last month, and frequently make mobile payments by tapping their phone against a contactless terminal in a store (80 per cent).

Prefer to be paid through electronic payments

Electronic payments are the primary and preferred way for gig workers to get paid. Of those that participate in short-term work, around two in five gig workers get paid by Interac e-Transfer or direct deposit, with 45 per cent who prefer to get paid by these methods.

Cheque and cash are also common ways for gig workers to get paid by 27 per cent of gig workers. However, only 19 per cent prefer to be paid by cheque, and 22 per cent by cash.

While gig workers want to receive fast, secure, and traceable payments, this is not currently the case for many workers. For one in five Canadian gig workers, it currently takes at least a couple of weeks to receive payment after their contract is done. Moreover, the gig workers who do get paid on the same day that their contract is done are predominantly paid by cash (59 per cent), which creates challenges for traceable payments.

HOW DO SMES PAY GIG WORKERS? 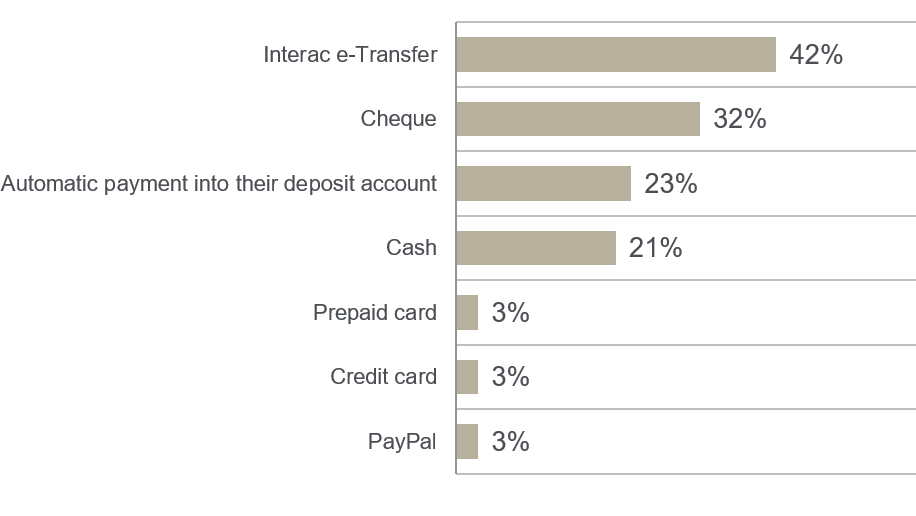 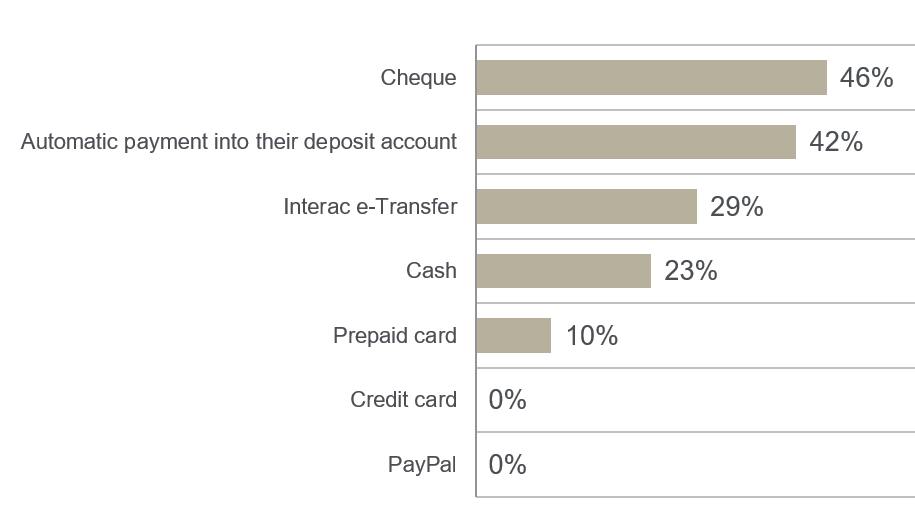 For many gig workers, there is a mismatch between how they are currently being paid versus their preferred payment method. Overall, gig workers want more access to electronic transfers and direct deposit and less reliance on cheque and cash payments.

HOW GIG WORKERS PREFER TO BE PAID VERSUS ARE CURRENTLY PAID 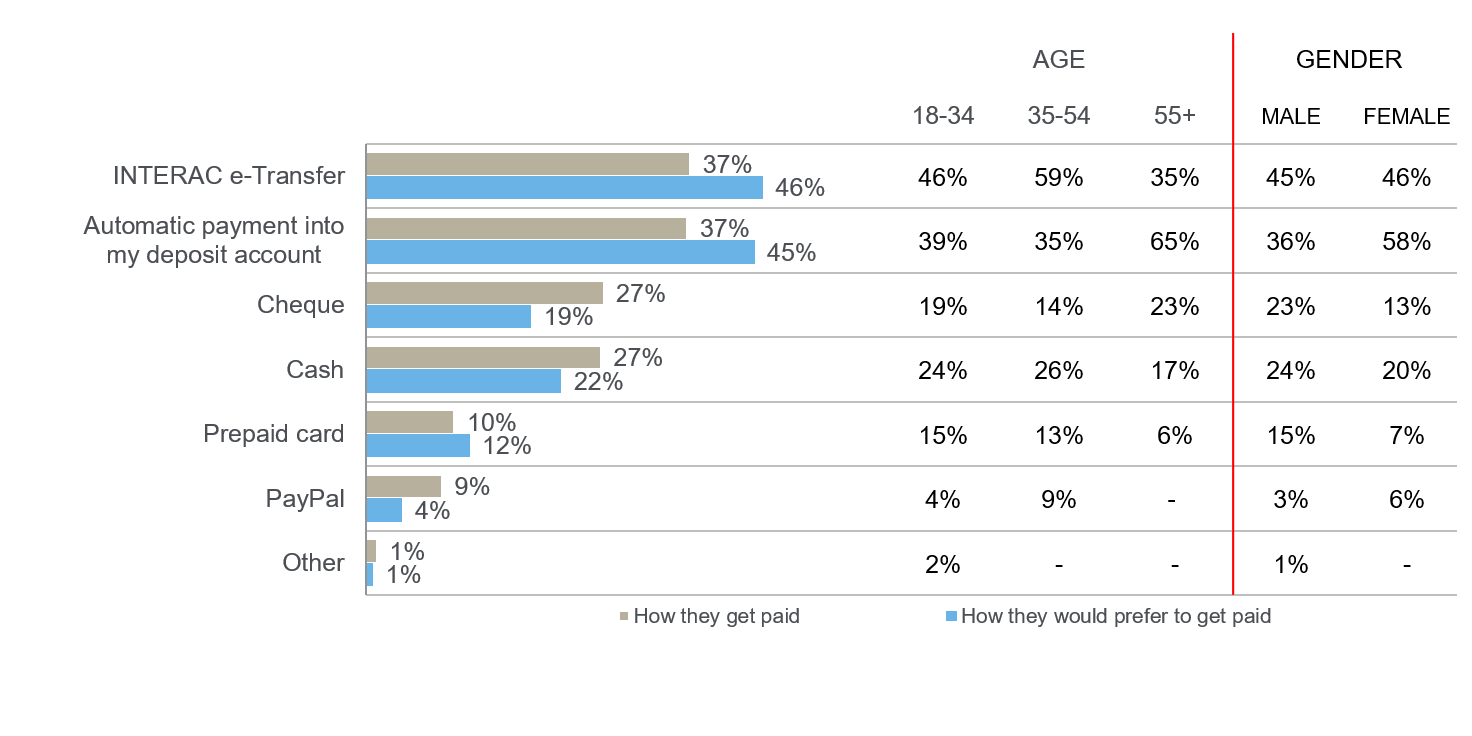 Gig workers and the businesses that employ them want the same thing from a payments solutions standpoint. They want to be able to send and receive payments that are fast, easy to complete, and traceable. However, there is a prevailing disconnect among a significant number of gig workers around how they want to be paid and how they are currently being paid. This points to a significant opportunity to evolve the payments solutions within the gig sector to benefit both the workers and businesses. A payments solution that can solve for this need/gap will improve the overall efficiency of the gig economy, and in turn, the Canadian economy.

Contact us for a complete version of the research report.