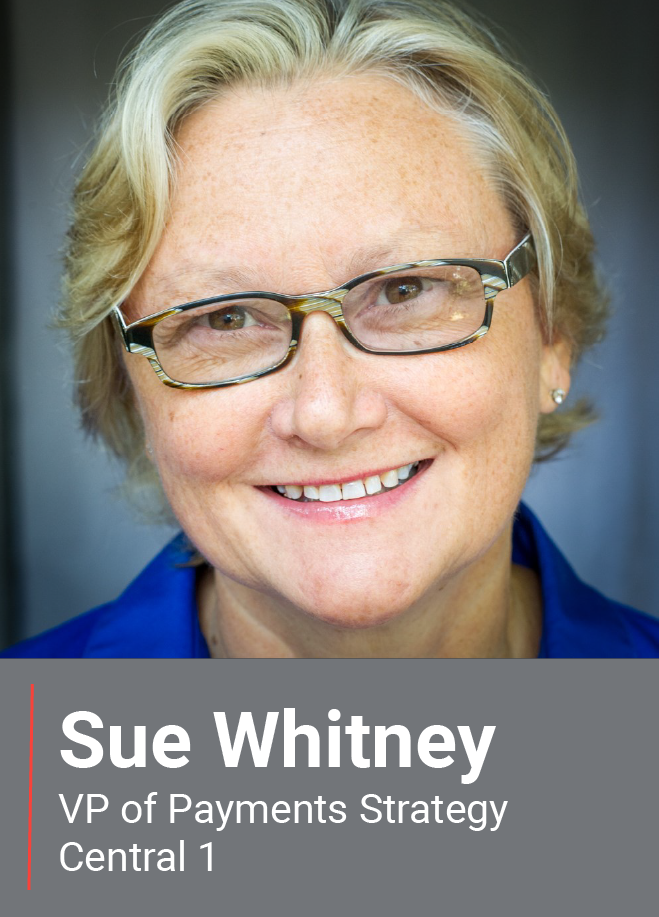 As the central credit union for British Columbia and Ontario, and manager of the Group Clearer (comprised of Central 1 Credit Union, Credit Union Central of Alberta, SaskCentral and Credit Union Central Manitoba), Central 1 settles billions of dollars in Canadian wire payments over Canada’s Large Value Transfer System (LVTS) each month. As the industry prepares for the launch of Lynx, which will be replacing the LVTS as Canada’s new high-value payments system, Central 1 is reaching important milestones in its modern payments journey. Leading the way is Sue Whitney, VP of Payments Strategy at Central 1. She shares the milestones the organization has reached so far, and what modern payments will mean for Canadian Credit Unions and their members.

How do you view Payments Canada’s Modernization project?

Payments Modernization is about Canada being competitive in the global payments space and becoming in line with modern payments offerings that currently exist in other countries, such as the United Kingdom and Australia. It’s about building a modern payments architecture that will enable financial institutions (FIs) to offer better customer experiences. For example, real-time payments will help businesses improve their cash flow and pay immediately, while consumers will benefit from more convenient payment options. Inherent in every aspect of Payments Canada’s Modernization project is ISO 20022, which will see an explosion of data that will travel with the payments’ message, allowing credit unions and other FIs to create more competitive, customer-specific offerings.

A key driver of Modernization is that Canada’s payments infrastructure continues to meet the very best in global standards for managing financial risk. This will be achieved by adopting global standards set out by the Bank of International Settlements and central banks around the world. Central 1 is actively focused on building up its infrastructure to meet the new standards, particularly related to clearing and settlement. Getting these foundations right will allow us to adopt different participation models and drive innovation.

Tell us about the recent milestones Central 1 has achieved on the journey towards Lynx go-live:

Central 1, as one of Canada’s 16 confirmed Lynx participants, began industry testing in January 2021 with Payments Canada in preparation for the switch to Lynx this summer. Central 1 has also successfully completed integration testing for an upgraded solution that we have invested in to ensure the continued safety and soundness of the wire payments we process when Lynx goes live.

Central 1 is a participant on the existing LVTS and as the Group Clearer Manager, acts as the Canadian credit union system’s financial institution connection point to Payments Canada (along with Quebec-based Desjardins, which serves Canada’s Caisses Populaires). Central 1 has a responsibility to deliver payments safely, efficiently and cost-effectively, therefore was required to pass various checkpoints to demonstrate to Payments Canada and the other Lynx financial institution participants that we are ready for industry testing.

This latest milestone follows our confirmation as a Lynx participant and demonstrates our commitment to ensuring the Canadian credit union system experiences an uninterrupted continuation of their wire payments and settlement of all payments when Lynx goes live.

What process changes will happen within clearing and settlement as a result of Lynx implementation?

As a Direct Clearer in Payments Canada’s Automated Clearing Settlement System (ACSS) and Direct Participant in LVTS, Central 1 settles billions of dollars in payments every month for the Canadian credit union system. We have a responsibility to deliver payments safely, efficiently and cost-effectively for the credit union system.

The real-time gross settlement design mandated for Lynx and the Real-Time Rail (RTR), Payments Canada’s real-time payments system launching in 2022, requires Direct Clearers such as Central 1 to pre-fund all payments sent by its payments clients. Lynx will transition the LVTS hybrid credit risk model from a ‘survivor-pay’ to a ‘defaulter-pay’ model and remove the need for the Bank of Canada to guarantee the finality of settlement if multiple participants default.

In our role as Group Clearer for Ontario and B.C. credit unions and for the other provincial centrals, we are obligated under Credit Union Prudential Supervisor Association rules to ensure that anyone member’s settlement activities do not impede the ability of other members to settle their payments.

With this greater reliance on our own funds to prefund settlement in real-time, we are required to implement additional controls beyond collateralization based on daily net settlement activity.

What is Central 1 doing to meet these new regulatory requirements?

We are helping the credit union system accelerate payments innovation and offerings by making certain that Lynx addresses the credit union systems’ technology, data, regulatory and treasury requirements. We are building the processes to support clients to meet all the new demands for faster, more final payments and funds movement and have the liquidity in place to meet the needs of its client’s customers.